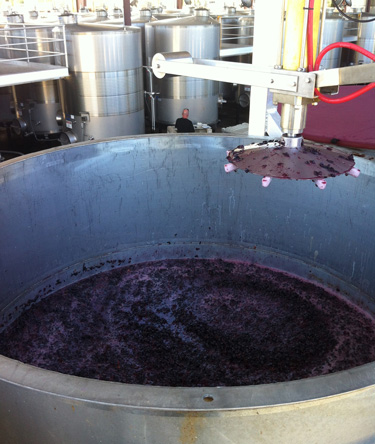 Now that harvest is over and we are busy pressing the last of our lots and putting wines into barrels, lets recap the season.

The weather during the growing season was a bit cooler than average.  We have seen later bud break and bloom in the spring, relatively mild weather and a slightly delayed veraison in the summer.  Sure there were a few heat spikes during the month of July, and it was a warmer summer that the last two years, but compared to the long term average, it was still cooler. The weather remained warm and pleasant until mid-October when isolated rain showers began.  Fortunately the rains were short and did not cause any severe damage or mildew problems.  Now that the fruit is in, the weather has turned fairly cold and we are expecting a fair amount of rain.  I am glad that we received all our grapes before the weather had a chance to spoil them on the vines.

This was an exciting harvest for Renwood this year.  We have invested heavily in new equipment and this harvest gave us the opportunity to play with all of our new toys.  We constructed new catwalks in the cellar which made pump overs, additions and most any other winemaking tasks much easier and more efficient.  While it may be difficult to see how catwalks can make better wine, when you’re in the thick of it, catwalks allowed us to get more accomplished in the limited amount of time available.  This translated into healthier fermentations that went to completion more easily.  We also redesigned our open top tanks and added a pneumatic punch down device.  This allowed us to compare the effects in wines where the cap was managed via pump over and via punch down.  The verdict is still out as both methods have their pros and cons; but it does allow for another layer of versatility and complexity in our wines. Last year we began increasing our concentration of new oak barrels in our barrels program and this year we continued adding new barrels and more French Oak.  We believe that this trend will once again further improve the quality of our wines.

Even with the cooler spring and delayed bloom, the warmer end of summer brought harvest right on time.  The white grapes began arriving in late August and red grapes began in mid-September.   Most vineyards that provide our grapes had yields that were 10 to 20% more than expected, and some were over by as much as 60%.  It was a large crop and yet the quality remained very high.  Flavors and aromas developed much earlier than normal and in many cases we were waiting for sugar and acid balances to mature before picking.  The preliminary tastings have shown very well structured wines with deep color and high tannin levels.  In time the tannins will mellow and allow the fruit to express itself more.  We are very excited with the initial results and expect great things from the wines of 2012.  Stay tuned for more updates from the Renwood cellar.