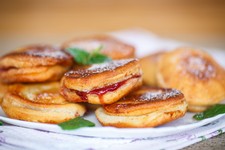 Tortas fritas translates to "fried cakes".  They are popular in Argentina and Uruguay, where it is traditional to enjoy them on a rainy afternoon with yerba mate tea.  Tortas fritas are quick to make and a great treat for weekend mornings as well.  In Argentina and Uruguay, tortas fritas are often served with dulce de leche or jam.  They are normally fried in lard, but you can substitute olive or vegetable oil.  There are many variations.  Some are yeast risen bread and resemble Native American fry bread and some tortas fritas are like sweet fried biscuits or donuts.

Our recipe at Renwood is unique.  We pan fry our flatbread in Colinas de Garzon Olive Oil for a healthier version.  This versatile dough can be used for both savory and sweet dishes.  For a sweet treat, fill with jam or dulce de leche and dust with powdered sugar.

Directions: In a large bowl or bowl of an electric mixer, dissolve yeast in warm water.  Let stand about 10 minutes, until frothy.  Whisk in sugar, sour cream, egg, salt, and ½ of the flour.  Using a wooden spoon or bread hook for a mixer, add the remaining flour, just adding enough to make a soft dough.  Reserve any leftover flour for shaping the dough.  Knead for 5 to 8 minutes on a lightly floured surface or using the electric mixer until the dough is smooth.  Place dough in a bowl, cover with plastic film, and set aside to rise.  Let it rise 1 hour or until dough doubles in volume.  Refrigerate overnight or for at least 4 hours.

Remove dough from refrigerator.  Dust a cutting board with flour.  Place dough on board.  Lightly flour the top of the dough.  Cut dough into 8 equal pieces.  Roll into balls, and place on a tray.  Cover with plastic film, and allow to rise until doubled in size, about 30 minutes.

During the second rising, preheat a large cast iron skillet to medium high heat.  While heating the skillet, roll one ball of dough out into a thin circle.  Pour a thin layer of oil in the skillet.  Carefully place dough in the skillet and fry  2 to 3 minutes, or until puffy and lightly browned.  Using tongs, flip the bread and cook another two to three minutes.  Do turn down heat if the flatbreads are browning too quickly.  Drain on paper towels.  Repeat process until all breads are cooked.  Best served warm.